Nitze and his photo cystoscope

Maximilian Nitze (1848-1906) was one of the first to experiment with cystophotography. Starting with his first cystoscope in Dresden, he planned to fix the virtual image on a frosted plate: “The light of the platinum wire seems particularly suitable for photographic purpose because of its richness in violet and ultraviolet rays.” Nitze recognized that the virtual image of the telescope could not be fixed photographically. He therefore suggested unscrewing the eyepiece and “placing a small camera similar to the one which Theodor Stein (1840-1892) cited for photographing the larynx in the open out end of the tube”. Doing so, a realistic image had to appear on the frosted plate of the camera. Photographically fixing this image was not possible because of insufficient lighting; Nitze therefore had to follow another course: “For photographic exposures, only a real image is suitable”. He thus photographed the real image, scarcely 2 mm large, which hovered in the tube of the telescope after unscrewing the eyepiece, and later enlarged it. When founding cystophotography Nitze’s efforts were supported through the years by a number of physicians and instrument makers who assisted in the improvement of photographic technology. The Berlin instrument maker Paul Hartwig constructed a film cassette in which a round light-sensitive glass plate was placed. Eight, and later ten, pictures could be exposed on it, when turning the perforated plate. The camera was placed eccentrically on a “photographir” cystoscope constructed by the Louis and H. Loewenstein Company. 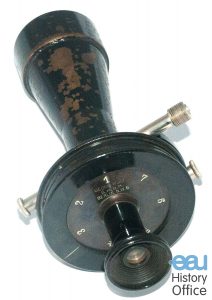 In 1893, Maximilian Nitze presented his work on “Photography of the human urinary bladder” at the Berlin Medical Society and published his best pictures in 10 plates with six photogravures each in 1894. Although Nitze was successful in producing the first usable photos of the bladder in which at least something could be seen, his method failed to achieve the desired results. Nevertheless, his pictures formed the basis for modern endophotography. Taking into account the simple aids available, one is surprised by the reproduction of cystoscopic images which are full of detail and very close to the original. Nitze clearly recognized the importance of endovescial photography and supported its use for educational purposes, for fixing rare pathologic pictures and for the development of pathological processes, as well as proof of findings and results of operations.

In the following years, numerous instrument makers and physicians worked on modifications and improvements to Nitze’s photographic cystoscope.