Johann Georg Ilg improves the Lichtleiter with his “Viennese Model”

Bozzini’s instrument, the Lichtleiter, reached Vienna from Frankfurt in November 1806, and set in motion the development of an improved, so-called Viennese model.

This improved instrument was developed at the medico-surgical Joseph’s Academy under the auspices of the its prosector, Johann Georg Ilg (1781-1836). Ilg presented a technically improved instrument only two months after the first demonstration of the Bozzini light conductor. However, the original of Ilg’s “Lichtleiter” or the so called “Viennese model” has never been found.

In a scientific session at the Joseph’s Academy on 17 January 1807, a comparison between Bozzini’s Frankfurt light conductor and the “Viennese model” was made in front of notable physicians. The outcome was clearly in favour of Ilg’s instrument. On the basis of this examination, the original text assesses the two light conductors as follows:

“The results here, too, coincided with those of the initial experiments of 9 December 1806 … wholly to the credit of the inventor – Bozzini -, and yet in view of its ease and convenience of use and especially as regards the intensity with which it illuminates the parts to be visualised, Ilg’s light conductor was thought by all members to have an undisputable advantage over Bozzini’s.”

Ilg wrote a report about the “Viennese model”, dated 1 October 1807. For reasons unknown, neither drawings nor measurements accompanied Ilg’s report, which made it immensely difficult to draft construction drawings subsequently. Nevertheless, thanks to Ilg’s report, the assessment made in January 1807 can be confirmed. 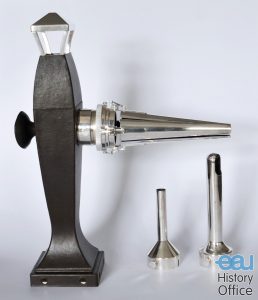 Replica of the so called Viennese model of the light conductor (Lichtleiter). In 1807, Georg Ilg, the prosector of the Joseph’s Academy in Vienna, introduced technical improvements to the original light conductor of Philipp Bozzini. Created by Karl Storz, Tuttlingen 2004. (Int.Nitze-Leiter Research Society for Endoscopy/Nitze-Leiter Collection)

The only evidence of Ilg’s Viennese model came from newly discovered written documentation. Without a drawings or measurements, it was especially difficult to portray the mechanism involving the simultaneous movement of all four parts of the “divided shaft” in one mere twist of a single disc. It is clear, however, that such a mechanism must have made it significantly easier to handle the instrument – particularly in situations that required the changing of the position of the shaft during an examination.

Doing this with the original Bozzini Lichtleiter, each of the four parts of the light conductor had to be adjusted individually using the respective device for each one – a threaded rod with nut and spring. Only then could the position of the instrument be changed. Once in the new position, the four parts had to be splayed open again separately.

This was a cumbersome and truly laborious process and so it is no wonder that, as stated in the session report of January 1807, “… in view of its ease and convenience of use…” the “Viennese model” was superior to the Frankfurt light conductor. The genius of the “Viennese model” lay undoubtedly in the fact that Gregory’s “principle of the perforated mirror” was applied for the first time in an instrument.

It was proven that by using a perforated mirror for illumination as well as for observation, the model does not require two channels. The spatial separation of light and image transport could be dispensed with, making it unnecessary to use a “reflection tube” in the “Viennese model”. The entire lumen of the tube was now available for both light and image transport, meaning examination shafts with a smaller diameter could be used – to the patient’s benefit – as Ilg also indicated in this report.

The simplified, single channel construction allowed for not one but two candles to be used in the housing. The 1807 observation that the “Viennese model” was better “… especially as regards the intensity with which it illuminates the parts to be visualised…” is therefore not surprising.

In 2001, the urologist Peter Paul Figdor from Vienna discovered a detailed report on the “Viennese model” by Johann Georg Ilg at a Viennese archive. Based on the two century-old document, and supported by computer aided design (CAD), the Storz Company of Tuttlingen in cooperation with Dr. Figdor succeeded in reconstructing the “Viennese Lichtleiter”. Today, replicas of Ilg’s Lichtleiter are exposed at the Nitze Leiter Museum of Endoscopy in Vienna, at the Musée des Sciences de l’Histoire de la Médecine in Paris as well as at the Urological Collection of the German Society of Urology (DGU) at Düsseldorf.

Source: Peter Paul Figdor, “Johann Georg Ilg’s “Viennese model””. In: The development of endoscopy in the 19th century and the report of the original Bozzini Light Conductor from the USA to Vienna