In 1876, the young physician Maximilian Nitze began his basic works to improve urethroscopy and develop cystoscopy. While working as a surgical assistant at the City Hospital in Dresden, Nitze was eager to find a new examination method of deep hollow viscera of the human body, particularly urethra and bladder, and constructed a number of instruments to practice this method.

In 1876, he came closer to his goal when -in his words- “a lucky break led me on the right path”: While working with his microscope and removing and cleaning the dusty eye piece, he happened to look through it to make sure it was clear and saw the reduced and inverted image of the Matthäus Church across the street. He immediately realized that it must be possible to visualize the interior of a hollow viscus with some type of telescope.

In co-operation with the mechanic Wilhelm Heinrich Deicke in Dresden and the University optician and mechanic Louis Bénèche in Berlin, Maximilian Nitze developed his first instruments. Bénèche delivered, after multiple discussions and experiments, an elegantly functional optical piece: a direct (prograde) optical unit similar to a terrestrial telescope, which he continued to produce unchanged until 1906.

From 1876 on, Maximilian Nitze had instruments for the illumination of the bladder, which however, were only prototypes. By the autumn of 1877, the instruments for the urethra, bladder and larynx were completed sufficiently to allow their use on a living patient. However, there were still problems to dimension the incandescent platinum filament for illumination of the cavity. On October 2, 1877, the 28 year-old Nitze demonstrated, with his co-assistant Alexander Schwede, the first urethroscope and cystoscope to the members of the National Medical College in the Pathology Institute in Dresden, using a corpse. There are still discussions among the experts whether this demonstration is considered the birth of modern urology.

The cooperation with Josef Leiter in Vienna

In order to find satisfying solutions to some still existing technical problems, Wilhelm Deicke recommended his friend Josef Leiter in Vienna. Nitze started a correspondence with Leiter in the beginning of June 1878. The Viennese instrument manufacturer travelled to Dresden, where he became acquainted with all the technical issues of the Deicke/Nitze models. For several months, Leiter worked with enthusiasm and with significant expense of time and money to improve Nitze’s instruments.

In October of 1878, Leiter wrote to Nitze that “the instruments have been finished completely for practical use”. Shortly thereafter in October, Leiter himself brought these instruments to Dresden. Nitze was bitterly disappointed, since not a single instrument could be used clinically. Finally, in December 1878, Maximilian Nitze moved to Vienna to personally supervise the further construction of the instruments. This close cooperation between Nitze and Leiter did prove successful. 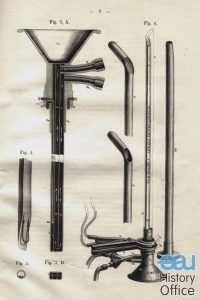 Woodcut of the first urethroscope and cystoscope built on the principle of the platinum wire filament. In: “Josef Leiter: Electrical-endoscopic instruments…,” Vienna 1880. From the collection of the Int. Nitze-Leiter Research Society for Endoscopy.

On 9 May 1879, during a session of the Royal Imperial Society of Physicians in Vienna, the surgeon Leopold von Dittel presented the first cystoscope by Nitze and Leiter, urethroscope and rectoscope on a patient to the medical public.

Immediately after this groundbreaking demonstration Max Nitze wrote his treatise “On a new illumination method of the cavities of the human body” which was published in the 26th volume of the Wiener Medizinische Wochenschrift in 1879. The scientific world listened and the international reception was enthusiastic.

By inducing the light source which is placed at the distal end of the cystoscope into the bladder, we are simplifying the examination technique; it does not matter how we move the instrument, we will always see the interior of the bladder in a bright light.

A galvanic glowing platinum wire should be the source of light, a continuous circulation of cold water should neutralize the produced heat.

Excerpt: Maximilian Nitze, “On a new illumination method of the cavities of the human body”. In: Wiener Medizinische Wochenschrift 26, 1879.

Recognising the new development of the cystoscope and its wide acceptance, the surgeon Bernhard von Langenbeck concluded his lecture on the operations of the urinary tract in 1880: “Endoscopy of the urinary tract as envisioned by Nitze and practiced eagerly may become an important tool, as it will allow us to diagnose a number of diseases early on and thus state the indications for an operative procedure of the urinary tract much more precisely. Under these conditions, we may predict a bright future for the surgery of the urinary system.”

Soon the relationship between Nitze and Leiter began to deteriorate. The instrument maker started to quarrel with the physician. The fact that Nitze, in his collaboration with his instrument makers, used to act demanding if not dictatorial probably accelerated the personal conflicts. On the other hand, Leiter was very ambitious. He claimed priority of the development of the cystoscope and other endoscopic procedures for himself.

By December 1879, Nitze had left Vienna and returned to Dresden. In 1880 Maximilian Nitze came to Berlin. Together with the Berlin instrument makers Paul Hartwig, W.A. Hirschmann and – from 1886 onwards – Louis and Heinrich Loewenstein, Nitze developed numerous endoscopes such as the irrigation cystoscope (1889), the photographic endoscope (1893), and operating and catheterising cystoscopes (1891-1895).

As A. Middeldorpf (1854), R. Voltolini (1871) and A. Hedinger (1879) did for endonasal and endopharyngeal surgery, Nitze used a red-hot platinum loop in the bladder. First he attached the wire loop and the spiral-shaped cautery electrode to the tip of the light bulb. Later he separated the lamp from the cystoscope and attached it to the tube. A Walzapparat (roller system) operated the loop which could be combined with the cautery. The loop was put around the tumour, tightened, and the galvanocautery was turned on. The hot loop cut and coagulated the tissue thus controlling bleeding. Nitze used this method for the treatment of 150 patients and recorded only one death.

Nitze’s operating cystoscope, which was publicised in the Zentralblatt für Chirurgie (Central magazine on surgery) in 1891 initiated endoscopic surgery. For the next five years he developed, together with Paul Hartwig, several 21 to 23 Charrière operating cystoscopes.

One year before his death, Max Nitze made his last invention. He developed a ureteral occlusion catheter to block the ureter of the diseased kidney so that the urine of the healthy kidney could be collected separately.