The Masters of Stone Surgery

From the mid-16th century well into the 18th century a number of self-taught stone-cutters who acquired their art through apprenticeship, became masters in the technique of stone surgery.

France took a leading role in cutting for the stone. In 1556 Laurent Colot was appointed court lithotomist by Henry II. He was the founder of the famous Colot dynasty who kept their methods secret through eight succeeding generations. According to a rumour, competing surgeons tried to find out details on the operation by spying through an opening in the ceiling of the surgery theatre at the Hôtel de Dieu in Paris.

François Colot died in 1706 and left a description of the technique which the family had carefully guarded for nearly 200 years. It was published in 1727.

When François Tolet (1647-1724) was appointed court lithotomist the Colot family had to share their supremacy in the field of stone surgery with the Tolet family. François Tolet wrote down his experiences in the “Traitè de la lithotomie” which was published in 1708.

The death of François Tolet also signalled the end of the separate status of stone surgery in France. From the middle of the 18th century it became fully integrated into scientific medical surgery. 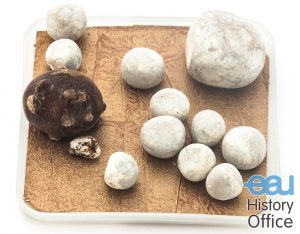 Collection of Bladder Stones, dated 1993, from the collection of the German Society of Urology (DGU).