The Celsian Method – The Apparatus Minor

Around 10 A.D. Aulus Cornelius Celsus (25 B.C.– 50 A.D.), a Roman noble, wrote the first clear description of the operation in “De Re Medicina”. He described what is called the “apparatus minor”, so-called because of the few instruments needed. He advised that the “aparatus minor” be used only in young boys not older than fourteen years and that the operation only be done in spring.

Several days were first spent on a light diet. The patient was then instructed to walk and jump so that the stone would descend to the bladder neck. When the time for the operation arrived the boy was placed in the lap of a “strong and intelligent person” who held him in a certain position to expose the perineum. 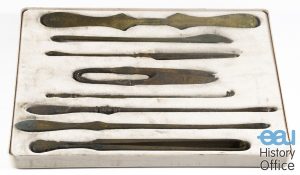 Replica: Set of surgical instruments from the Pompeian and Herculaneum era. The original surgical set is to be found at the National Museum in Naples. Int. Nitze-Leiter Research Society for Endoscopy, Vienna/Reuter Collection.

The operator stood or sat facing the perineum and the forefinger of the left hand “well dipped in oil” was inserted into the anus and pressed upward and forward towards the pubis. His right hand was placed in the suprapubic region to push on the bladder and force the stone into the grip of his left forefinger, which pulled it down so as to produce a perineal bulge. With the scalpel held in his right hand, a slightly curved transverse incision was made in front of the anus with the convexity directed toward the bulb of the urethra.

The incision was made deep into the stone, the bladder being cut in the trigone or just behind it. The stone was then pushed out by his left finger in the rectum.

If the stone was large, a “crochet” or hook was used. It was slid into the bladder, hooked around the stone and slowly and gently withdrawn with a sideward and forward motion.

The wound was not sutured. If haemorrhaging was severe the patient was put into a bath of vinegar and salt. Two hours after the operation he was placed in a tub of hot water. The wound was then dressed with wool and warm oil.